Red squirrels can carry a variety of internal and external parasites, including lice, ticks and mites. It is essential to thoroughly clean squirrel feeders to avoid transmitting parasites and disease. Red squirrels are also susceptible to various diseases, some of them being:

An injectable vaccine has been developed which in laboratory testing is effective against squirrel pox.  Further work is required to develop a method of administering an oral vaccine to red squirrels in the wild. 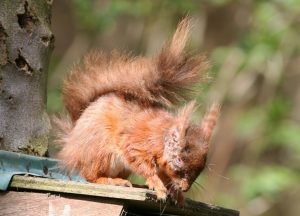 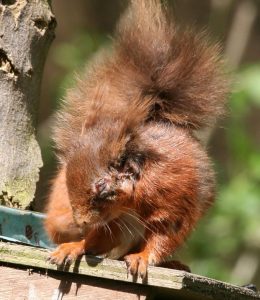 Adenovirus
Red squirrels are susceptible to other diseases and illness aside from SQPV.  Adenovirus is a relatively recently identified threat, and its impact on wild populations is still not fully understood. It is an enteric virus, therefore reds show no outward signs of the disease, however animals are often found dead. Current research by the AHVLA is continuing to shed light on the impacts of this disease as studies continue to identify confirmed cases. There is growing evidence that this disease may be introduced by rodents such as mice and rats, especially in the case of reds in captivity.  For more information click here.

Leprosy
Leprosy in red squirrels is a recent discovery, not because it is a new disease but because nobody had recognized it in the past. It is widespread, from Scotland to the Isle of Wight and Brownsea, and is likely to have been around in red squirrel populations for centuries. About 25 years ago, it was noted that some squirrels had ‘warty ears’ but they seemed well in other respects. It takes a long time for the disease to progress so most animals would die of other causes before the leprosy took hold. If you see red squirrels with what look like ‘warts’ on the ears or elsewhere on the body, please contact your local red squirrel conservation group. (Helen Butler, Wight Squirrel Project) 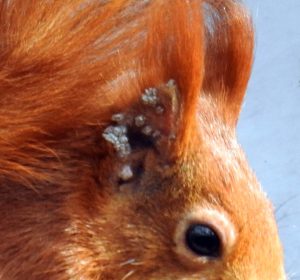 Red with Leprosy, Isle of Wight

The JSPCA Animals’ Shelter are very pleased to announce the publication of a paper on the health of Jersey’s red squirrel population in a professional veterinary journal, The Veterinary Record.  This report is the culmination of 7 years of research carried out by former JSPCA Veterinary Surgeon, Tiffany Blackett, on deceased squirrels that came into the JSPCA during this period.  The work was partly funded by grants from the Jersey Ecology Trust Fund, the Jersey Countryside Enhancement Scheme, Howard David Farm Trust and donations from kind benefactors.  Tiffany is passionate about red squirrels and is dedicated to the continuation of the JSPCA Animals’ Shelter red squirrel disease surveillance scheme which she presently operates in a voluntary capacity.

This important work aimed to establish the cause of death and incidence of specific diseases in a total of 337 dead squirrels.

The results showed that 50.7% of squirrels examined post-mortem died as a result of road traffic injuries, 34.4% died from disease, 6.5% from trauma such as that associated with falls or entrapment, 7.1% died as a result of being attacked (by cats, dogs and birds including crows and magpies) and 1.2% died from suspected poisoning.

This work also highlighted that in the Jersey red squirrels that were examined in this study, there was no identification of the presence of squirrelpox virus.  Squirrelpox virus is carried by the larger, non-native grey squirrels found in the UK and is usually fatal in reds.  The most common disease processes identified in this study were a parasitic infection caused by a nematode worm that affects the liver, amyloidosis (abnormal protein deposits that build up in various organs and tissues) and a condition called Fatal Exudative Dermatitis (a bacterial skin infection).

Whilst it is estimated that there are currently only about 500 red squirrels on the island, a separate study in 2013 showed that in-breeding in the Jersey squirrels was not associated with the incidence of general disease or cases of amyloidosis.

The JSPCA is proud to have supported this study and continues to assist this vital, on-going research into the health of Jersey’s red squirrel population.