Male and female red squirrels are very similar to look at with an average body length of 22cm, a tail nearly as long again and a weight of around 300g, giving the impression of a very lightweight, agile and dainty animal.

Their coat colour is usually reddish but can vary from almost white to almost black according to age, genetic variations and the seasons. 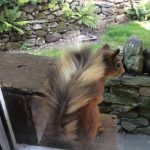 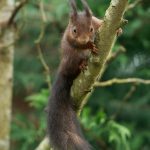 In winter the red squirrel has a thick, warm coat and bushy tail, with impressive ear tufts some 3 cm long. In summer the coat and tail are thinner and sleeker and often the ear tufts disappear completely.

The tail is used for balance, warmth and also as a signalling tool.

Good eyesight with a wide range of vision and sensitive, cat-like whiskers help to observe predators and judge distance and size. Red squirrels have five digits (small thumbs) on all four limbs with long, strong claws essential for climbing. The front hands are very dextrous at manipulating small objects such as seeds and they appear to be either right- or left-handed.

Life expectancy is thought to be between 3 to 7 years in the wild but much longer in captivity. Both sexes are promiscuous with mating occurring in the winter or early spring. Individuals are capable of breeding from ten months of age. Usually one litter of three kits is produced, but if there is plentiful food available in July, there may be a second litter

Red squirrels do not normally live in high densities (less than two per hectare) with the juveniles dispersing in May and October, sometimes travelling 10 km or more.

Mortality in the first year can be as high as 50% but declines with adulthood. Causes of death include starvation, road accidents, predation and disease.